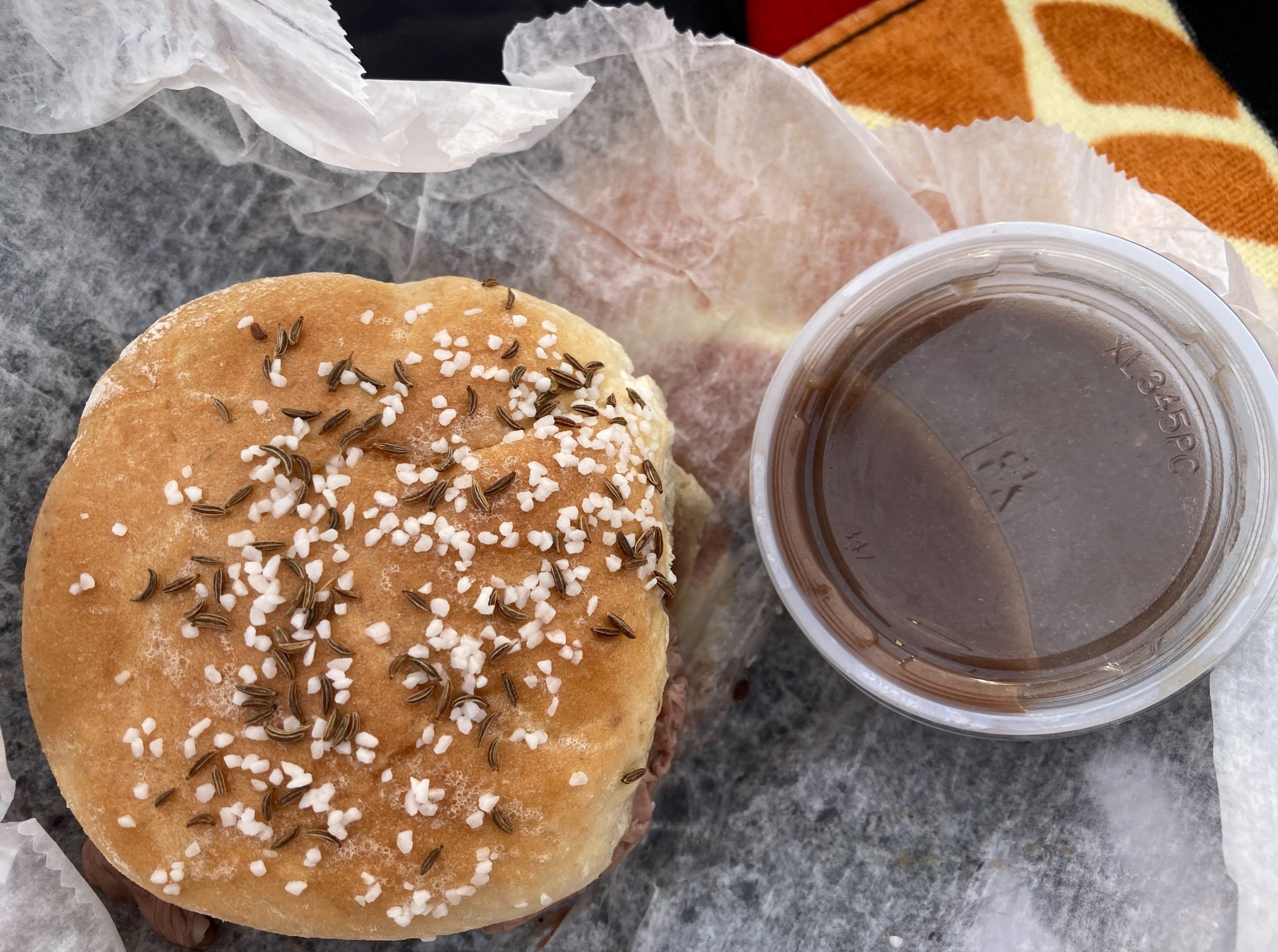 Beef on weck reminds me of my childhood. My great-grandparents owned a butcher shop in Dunkirk, New York, and were fabulous in the kitchen. Thanks to their familiarity with meat, my Busia and her sisters could make a mean roast beef. We visited a family cottage in Van Buren Point in New York every summer. It’s super close to where my mother’s side of the family grew up.

My aunt still lived above the family butcher shop, where she would thinly slice beef. She would work in the hot kitchen on an August day with no air conditioning in her 80s. She’d roast beef, broil corn, and boil potatoes.

She’d bring casseroles of delicious food to the cottage: fresh, local corn on the cob with lots of butter, homemade potato salad with Hellman’s mayo, and beef. Roast beef with au jus and horseradish on a fresh-baked salty kummelweck roll tastes like a dream.

What is the history of beef on weck?

The history of beef on weck in Niagara Falls, New York, is interesting.

Beef on weck originates in Western New York sometime in the mid-19th century. The story is that a German baker created the kummelweck roll, a bun topped with salt and caraway seeds. Kummel means caraway, and weck means bread in southwestern German dialects. However, the American roll is fluffier than the standard.

A local pub owner used kummelweck to serve roast beef and hoped the salty roll would encourage his patrons to buy more beverages. The slow-roasted rare beef is hand-carved in thin slices. The top of the roll is cut off and can be dipped in au jus. Many serve the dish with horseradish.

What beef on weck is best?

Our favorite beef on weck in the Niagara Falls area was on Grand Island at Adrian’s Custard and Beef. The shop is family owned and operated since 1989. It serves award-winning roast beef sandwiches and custard. Since 1989, Adrian’s has served quality and fresh ingredients. Adrian’s also offers vegan, gluten-free, and keto options. But with custard and beef on weck- you can’t go wrong!

How are buffalo wings and beef on weck at Anchor Bar?

The quality of beef on weck does not exist everywhere. Unfortunately, the Anchor Bar made terrible beef on weck. I disliked insulting local businesses, but it was dry and horrible. However, the wings were life-changing!

Did you ever wonder why buffalo wings bare their famous name? Thank Anchor Bar in Buffalo, New York. Dominic Bellissimo was a bartender looking to serve his hungry friends late one night. He asked his mother to prepare some food for his friends. With a backstory like that, I expected delicious Buffalo wings- and they delivered. However, in western NY, they call Buffalo wings simply ‘wings.’

She deep-fried chicken wings, the part of the chicken usually used for chicken soup in the stockpot. With a little secret sauce, the wings became an instant hit. Soon people came from all over to try Buffalo Wings. They have spread worldwide, but they all started at Anchor Bar.

Where else do you get beef on weck in Niagara Falls, NY?

Where can I get beef on weck in Western New York?

Visit a silo that overlooks the Niagara River into Canada if you want to venture to the Silo in Lewistown. While it’s a quick-service restaurant, the views are incredible. You can hit the train car serving ice cream if you have room left after the comfort food festival. If you’re tired of beef on weck, feast on the haystack- a roll stuffed with shredded ribeye, mozzarella cheese, and crunchy hash browns.

What if I want to make beef on weck at home?

If all else fails, go to Wegman’s and get kummelweck buns. And just a note- it sounds a bit like kimmelweck, but it is spelled kummelweck. If in doubt, act like a local and call it weck.

While my roast beef and au jus are not nearly as tasty as the real deal- the buns can be frozen, so we can enjoy beef on weck on cold winter nights. Until the rest of the world gets beef on weck, we will have to make it ourselves!

What does BW3 stand for?

Beef on weck in Niagara Falls, New York, makes the trek to the Falls even MORE worthwhile. Is your soul craving the comfort food of beef on weck or real buffalo wings? Please leave it in the comments! 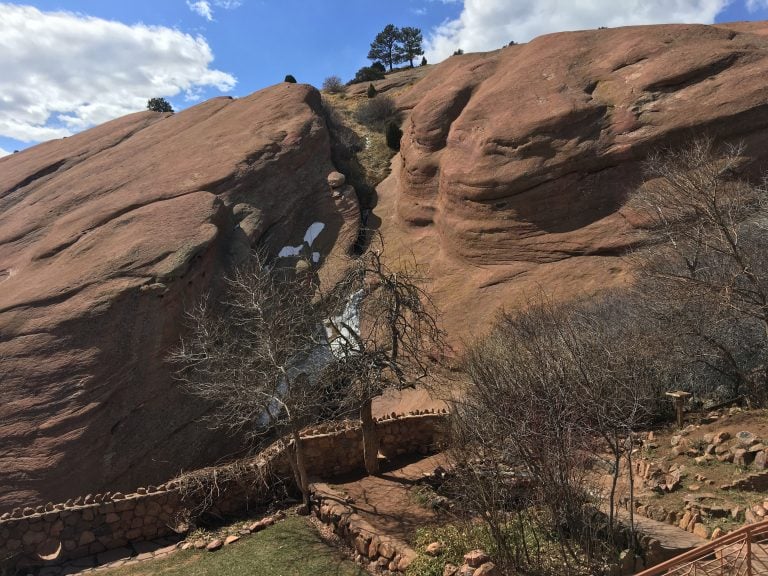 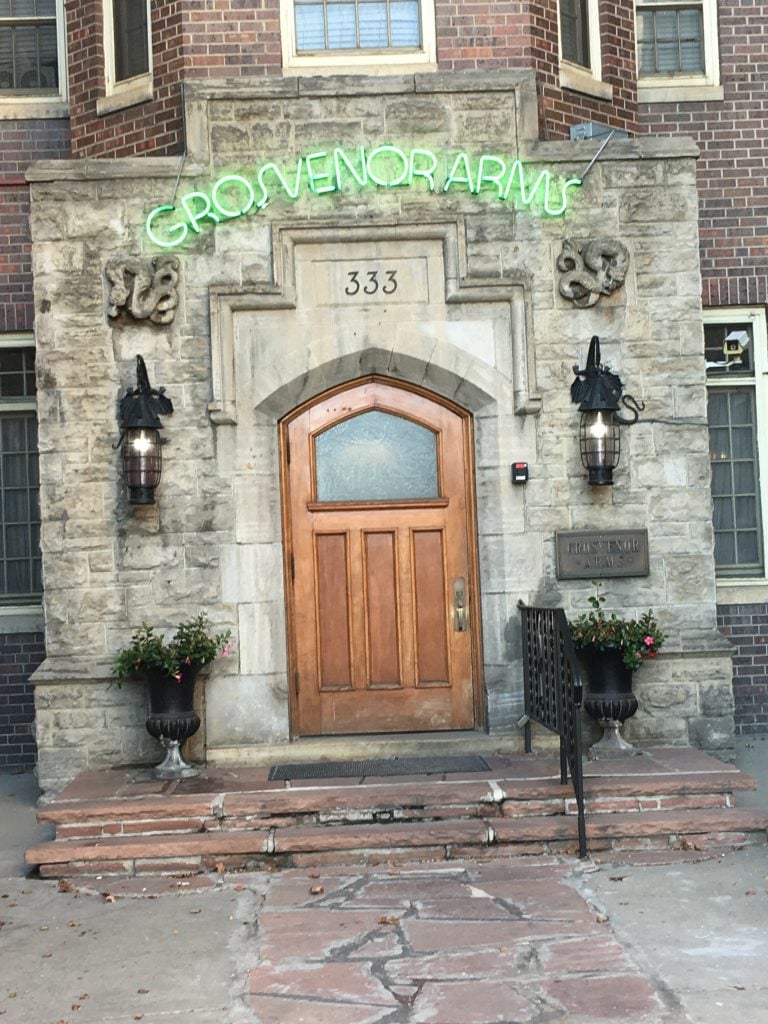 In our ideal Denver self-guided walking ghost tour, I’ve compiled a list of my favorite spine-chilling buildings. During the fall, I enjoy scaring myself a little more than usual. If you want to make it less frightening for your kiddos, go during the daytime. You can walk it- just make sure you time your parking… 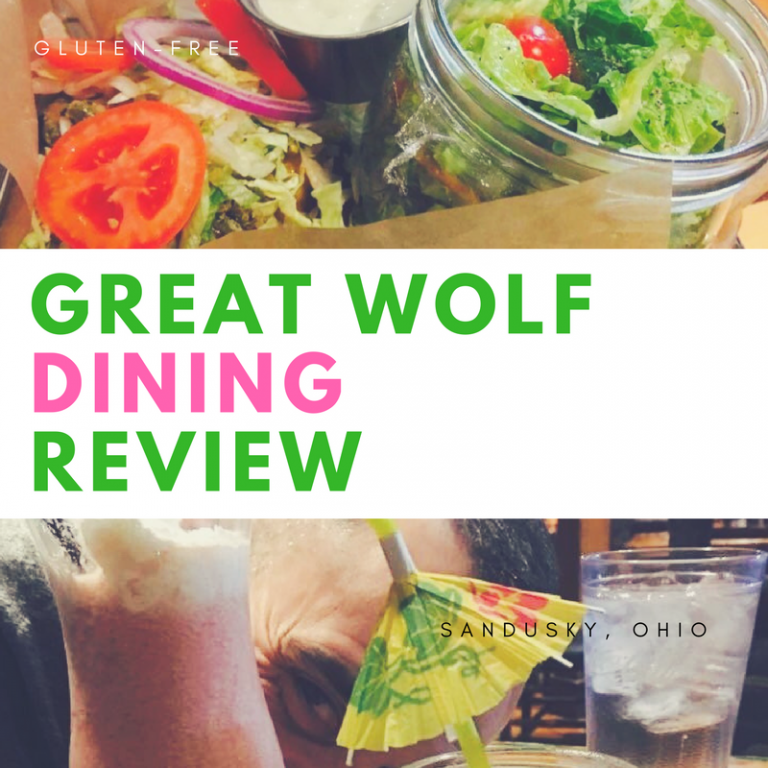 Gluten-free at Great Wolf Lodge Ohio We were ravenous after a long day at the indoor waterpark at Great Wolf Lodge in Sandusky but looking for convenience. The Lodge features several restaurants within its lobby. We chose to have a sit-down dinner at Gitchiegoomie Grill and hoped they’d support our gluten-free needs. Read about our… 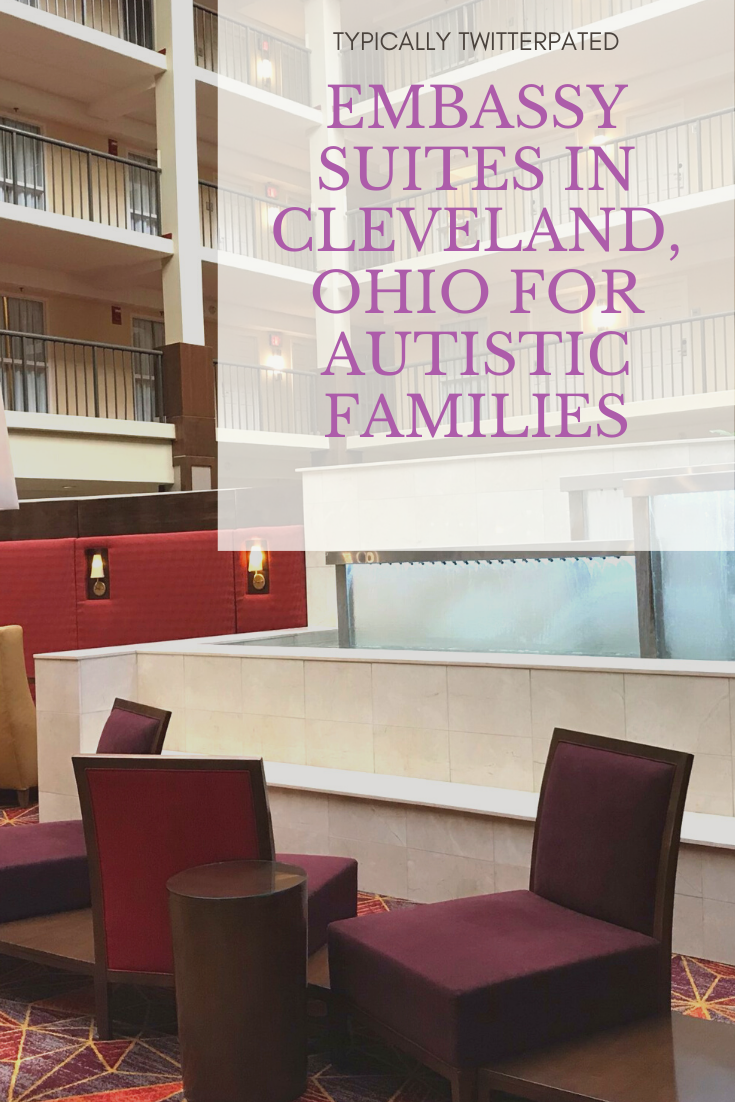 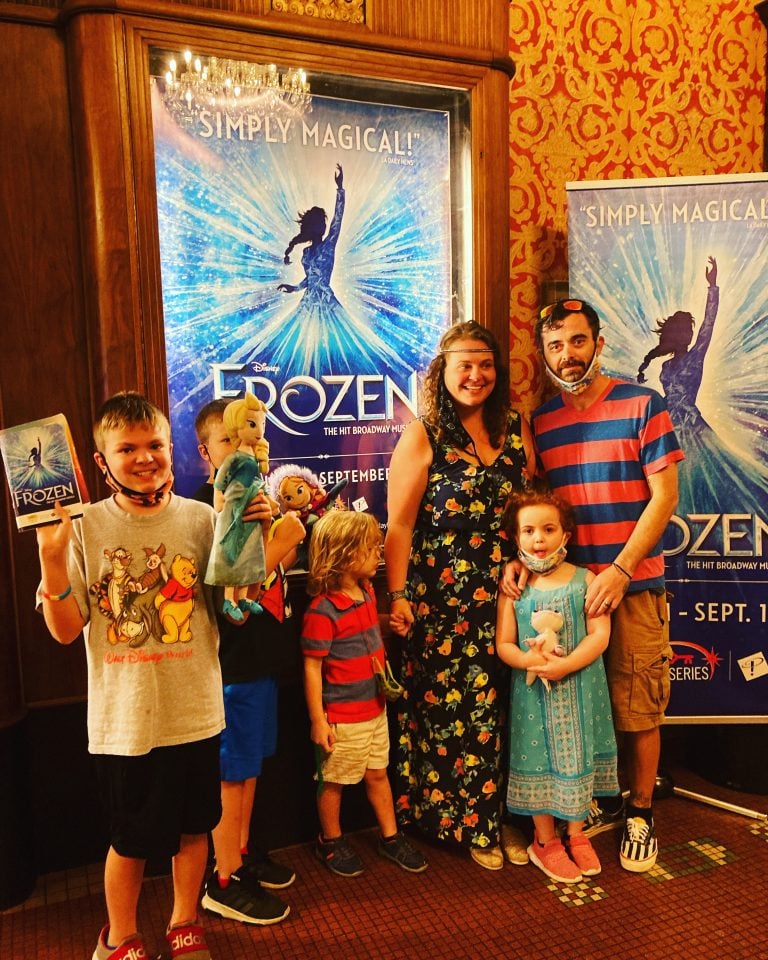 Our family enjoys Broadway shows as they travel across North America. However, locating sensory-friendly plays in Cleveland can be challenging when your children are neurodivergent. Luckily, we tracked down an Autism-friendly theater quickly. This article will discuss the best ways to enjoy sensory-friendly local theater events in Cleveland, Ohio, and give reviews of our Playhouse… 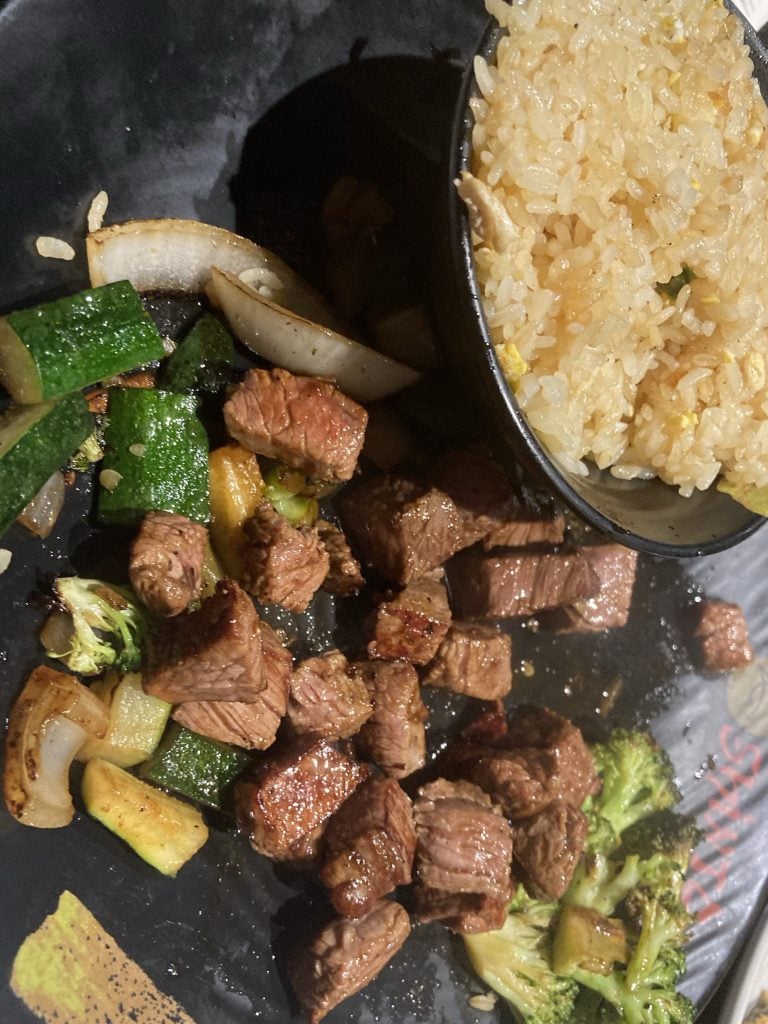 We have you covered if you’re in Cleveland, Ohio, and contemplating finding a Japanese steakhouse nearby. Check out our Shinto Japanese Steakhouse and Sushi Bar (in Strongsville) review. Shinto Restaurant There are several different seating areas at Shinto, including the bar, the dining area, the hibachi tables, the sushi bar, and the outdoor seating area….